Bio-HPF® is a special digestive support formula supplying a synergistic complement of herbal components. Despite the highly acidic environment of the stomach, H. pylori is able to persist, thought to be due primarily to its characteristic spiral morphology, and its high motility. Acute H. pylori induced gastritis is associated with hypochlorhydria, and colonization is speculated to have the ability to modify the net gastric acidity, by virtue of the substances the bacterium secretes. H. pylori infestation is associated with a dysregulation in the function of the gastric epithelial barrier, as well as with increased epithelial permeability.

Additionally, the inflammatory response to H. pylori is well documented, implicated to result in cellular proliferation and gastric mucosal damage. H. pylori components have been demonstrated to act directly on gastric epithelium and to induce an increased release of cytokines. These actions have been primarily attributed to the up-regulation of inflammatory markers, including COX-2 and IL-1β. To curtail this deleterious effect on the gastric mucosa, a comprehensive blend of phytochemical nutrients, known to have a positive impact on the gastrointestinal tissues, may aide in healing and repairing these tissues. Select herbs are recognized as possessing anti-pylori activity, noted to downregulate inflammatory markers associated with H. pylori infestation and correlated to gastric inflammation. Additionally, the use of select herbal components has demonstrated a positive effect in reducing the antigens associated with H. pylori.

Caution: Not recommended for pregnant or lactating women. KEEP OUT OF REACH OF CHILDREN.

Two (2) capsules two (2) or three (3) times each day as a dietary supplement or as otherwise directed by a healthcare professional. 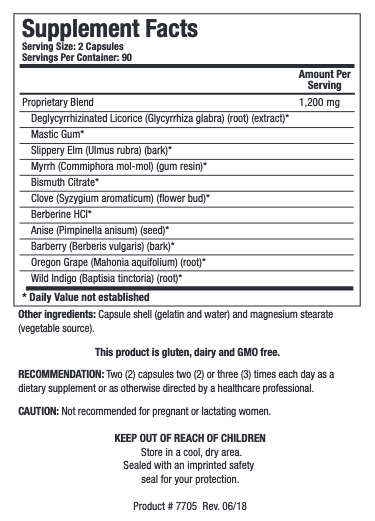